It was a strange morning. I almost spat my coffee when the morning radio announced Colonial Pipeline was attacked by a ‘cyberpunk’ group… (The last coffee-spitting-instance was when they put ‘Joe Biden’ and ‘decolonial’ in the same sentence after his first 100 days as U.S president.)

On one hand, I was puzzled by the sheer surrealness of having a ‘science fiction genre’, being actionised and normalised as part of the daily news. And on the other, as a former teenage who fantasised about being a hacker (I am sure that I was not the only one, right?) — shall I be thrilled that we finally live in THE cyberpunk world? Are we heading toward the future as described in, what is now known as, The Cyberpunk Manifesto:

For the cyberpunks, by stark contrast, technology is visceral. It is not the bottled genie of remote Big Science boffins; it is pervasive, utterly intimate. Not outside us, but next to us. Under our skin; often, inside our minds…Certain central themes spring up repeatedly in cyberpunk. The theme of body invasion: prosthetic limbs, implanted circuitry, cosmetic surgery, genetic alteration. The even more powerful theme of mind invasion: brain-computer interfaces, artificial intelligence, neurochemistry.

In late 2020, a cyberpunk-themed open world game reached a record-high digital game launch of all time, with over 10 million copies sold in December alone (global games are expected to sell over 1 million copies on average) and I was one of the many gamers who pre-ordered a copy, after being seduced by the aesthetics of a disobedient yet heroic, techno-open world. Look: who couldn’t resist Keanu Reeves (who was featured in the game trailer), as he extended his cybernetic arm and mouthed, ‘Wake the f- Up Samurai, we have a city to burn!’[1] 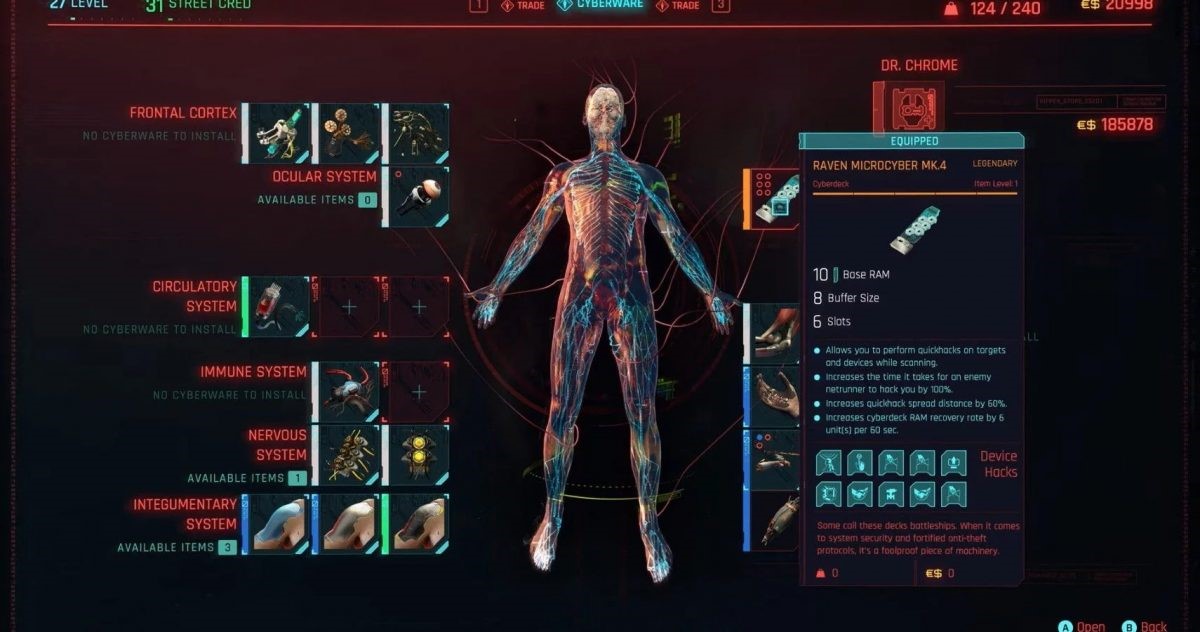 (The cyberware menu from Cyberpunk 2077)

Indeed, it is all too tempting to take that cybernetic arm and submerge oneself into the neon-lighted, electronic superhighway to the game space, where we get to unapologetically embarrass the techno-orientalist ideals by juxtaposing essentialised eastern signs and symbols, along the highly technologicalised landscape, realized by state-of-the-art 3D rendering. The game even attempts to render a transhumantist future by offering vanity options, from choosing the character’s genital (‘mix it up’ as the game put it) to implanting cyberware. ‘I’d rather be a cyborg than a goddess,’ as one may recall in Cyborg Manifesto (1985). Yet, the techno-orientalist aesthetics embedded within our character’s cyberware reminds us that first world cyborgs would source their components in sweatshops abroad, as argued in CyberFeminism (1999), as a critique by cyberfeminism.[2]

When our fully technologicalised body is ready, Keanu Reeves would lead us to start a war on ‘corporate colonialism’ (yep, this was the exact wording from the game) which basically means bombing a ‘souless’, hi-tech corporation from Japan. Hence, our cyberpunk heroes, are ‘liberated’ through programmed freedom and radicalism, with a mission to resist the ‘electronic colonialism’ from the far east — a phenomenon that was brilliantly articulated in C.B. Patterson’s work, Open World Empire (2020):

This open world vision of freedom reiterates the desire to conquer and dominate foreign spaces and in many ways circles back to an old definition of freedom as travel and dominance, a freedom that is imagined today by comparing the West with the “unfreedoms” that characterize Asian technology (China’s “great firewall”; production lines at assembling plants and microprocessor factories; the cyberpunk dystopia of Japan and Hong Kong; the e-waste in toxic rivers and garbage patches; the deaths of Asian gamers who are hopelessly addicted to video games).

After playing Cyberpunk 2077 for over 30 hours last week (I would try to excuse myself that it was for research purposes,) my left shoulder suffered from a rather severe pain. This led me to contemplate the idea of a fully technologicalised body–just imagine how it may alter the way we answer a simple question like: ‘where are you from?’

Well, the answer would probably be: “My optics are form Hong Kong, the frontal cortex is from Tokyo, and the rest are just black-market stuff from Shenzhen…”

[2] Susan Hawthorne and Renate Klein argue that certain fundamental feminist concerns were missing in the cyberfeminist movement, hence they proposed CyberFeminism, with a capital F.