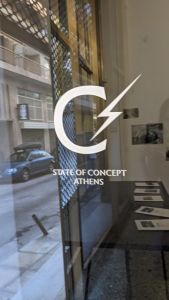 I must admit that I was utterly bewildered when friends and family commented on me becoming a Greek Goddess, after hearing my arrival in Athens. First thought – I could only imagine it was due to some sort of ‘exotic’ tourism-marketing back in East Asia. The same ‘logic’ is reflected in the ‘Harry Potter Aesthetics’, plus a dash of Old Etonianism, in advertisements from British international schools. I also found that the interior of certain European consulates in Hong Kong still resembles scenes from the 1979’s TV classic, Tinker Tailor Soldier, Spy. It is a different kind of European Dream, like a reversed version of Barthes’ Empire of Signs[1].

Second Thought—Arachne. A classic Greek myth where a mortal foolishly committed ύβρις (hubris), by challenging the goddess Athena in a weaving competition. Interestingly enough, ύβρις (hubris) is the only Greek word I knew just before arriving in Athens (Update: I have now acquired the ability to say ‘Γεια σου’). It was because I went through a period of obsessively reading the work of Jungian analysts, namely Marie von Franz and Liz Greene[2], who frequently discussed the subject of ύβρις in mythology and its psychological manifestations. Spoiler alert: It never ends well.

However, as von Franz and Greene stressed in their work, one must not interpret mythology in a literal sense. While I surely have little interest in ‘cosplaying’ as a Greek goddess, my concern of not imposing any superficial assumption on the art and political situation in Greece has been yielding for wisdom from Research as Resistance and Critical Ethnography[3].

Hence, it meant so much for me to have the opportunity to work with iLiana Fokianaki, the founder of State of Concept, which is known as the most political art-space in Greece, as my first secondment in the FEINART programme[4]. In the very first instance we met, she already gave me a fascinating, conceptual tour of the Empire (always singular, with a capital E,) which is intricated with the impossibility of decolonisation (there is no decolonisation because everything is colonisation), the economy of art-tourism in the Global South and the white-washing of Greek culture – one may want to have a look at Fokianak’s Redistribution via Appropriation: White(washing) Marbles (a title which fit aptly with the dark marble façade at State of Concept) in e-flux journal[5]:

the links between Europe’s core financial countries, their meddling in peripheral countries, and their influence on what I call the “Extra States” (the IMF, Troika, etc.) has remained opaquely addressed or completely bypassed in recent discourses during and after mega-exhibitions that landed in the city of Athens and elsewhere The last two editions of Documenta are prime examples; in addition to the central exhibition in Kassel, the 2012 edition also held a show in Kabul, and the 2017 edition in Athens. Documenta 14’s approach to Greece’s relation to modernity and nationalism was myopic at best. Like imperial powers, mega-exhibitions tend to arrive as they please, in different permutations in different locations around the globe, translating local realities for the sake of their (curatorial) narratives.

When I expressed my research interest in Technosystem and Empire, Fokianaki reminded me of State of Concept’s endless race as an independent art space after the Empire, fighting for visibility on the information superhighway. She also offered examples of the uneven distribution of technoliteracy between the centre and the periphery of the Empire. How could small institutions in the global south compete with the increasingly digitalised artistic production in the North? I was then wide awake and realized my ύβρις for taking techno-accessibility for granted. Our conversation has surely prepared me well for the research journey, understanding the economic, political and cultural complexity within Greece. It maybe best summed up by the fabulous production manager at State of Concept, Electra Karatza: ‘Waiwai, you got to see the deep Athens.’

Greene, Liz. The Dark of the Soul: Psychopathology in the Horoscope. Centre for Psychological Astrology Press, 2003.