Connecting with my privilege

Volcano UPDATE: I am sure, some of you might be interested how the Icelandic volcano is doing. And with continuous excitement I can report that mother earth keeps on roaring. What started with one crater one month ago is now a volcano park with 6 craters that is forming a magnificent lava stream landscape – and there is no sign that it will stop anytime soon. 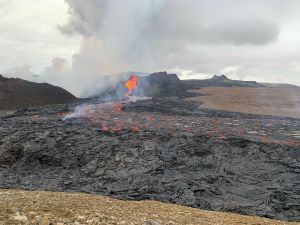 But on to the research: Recently, we – the FEINART researchers – took part in a workshop on ethnological field studies and it started with reflecting on our own motivation and goals for this research project as a way to think about the position from where we start to look at our research objects. It made me realize once more that thinking about the future of democracy has a very personal meaning to me. I am the first generation in my family to have grown up in a democracy, and also under capitalism. My grandparents and parents were socialized in a country – the GDR – and in institutions that no longer exist. There has always been an identity divide between us – mostly a positive and productive one –  because I went off to travel the world and receive my education in institutions of the west. The wish to be a part of that world took me far away from home and then brought me back again. My biography is therefore permeated by the navigation between different cultures. Being able to do that has been a privilege but also a compulsion in one way or another. The reflection of my personal privileges and that of my peers, but also the „epistemic privilege of the first world“ as Walter D. Mignolo calls it has been at the center of many discussions I had in the last weeks. And there are definitely more questions than answers at this point. What I have come to know for myself though is that it is not enough to be aware of my privilege, I rather have to find modes of positioning and acting that support the actual change that the socially engaged art projects I am observing are striving for.

My research project is supposed to create knowledge about the role of socially engaged in different cultural contexts with regard to the future of democracy. While it is tempting to paint a big picture and to dip my toes into different cultural contexts I am also feeling hesitant about it, triggered by the question: how much will I be literally able to understand of what I will be observing? Navigating different cultures taught me that understanding the subtlety of cultural differences takes a depth of experience and knowledge that is hard to acquire in a short field research stay. Therefore rather than exploring completely new cultural contexts I will deepen the ones I have an understanding of, which is the German and especially the East German cultural context and the South American context and I will look at the topics that have been the red thread of my biography, critique of capitalism, the commons and building communities, and feminism.

What has also been part of my reflection is what scientific knowledge actually is, and in what ways it is able to stabilize or destabilize the status quo. And, although my research topic is not a reflection upon the role of scientific knowledge in society, I think my epistemic mindset is a crucial starting point for any analysis and interpretation. For one, there is no linear structure in this world, and for most of my academic training I have been more or less taught to develop rigorously structured texts that develop an argument – and I am still a big fan of that. But I am also drawn towards developing a structure that is more open, that has enough holes through which the chaotic thought processes and the big realm of not knowing can shine trough.