The night is almost absent. When day and night are not clearly separable anymore there enters a stronger sense of fluidity into ones being and thinking. In Iceland the sun now only dips for a few hours below the horizon. Blurring the lines between categories that are meant to draw distinctions revealing their fictionality. Anything only exists in distinction to something else, me and you – separate? But as the day is taking over the night, where does the night go? And where is this separation between me and you located, where is the separation between you and the outside located? When the night never starts when does it end? The closing and opening of my curtains invites the night and welcomes the day. 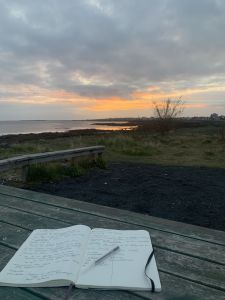 Imagining life in a post-growth fluid society. Iceland radiates a certain silence and tranquility – it’s a good place for human nervous systems. Soaking in warm water that comes directly from the earth, refreshing in a cold lake or the ocean, sitting in sulfur steam. The predecessors of our species lived in water and eventually entered the land – here I spend so much time in water that I sometimes think it is the better habitat than my modern concrete apartment. And just as the day’s edges become fluid, the water introduces an even more direct experience of fluidity. Flowing into/with nature but also becoming aware of the different qualities of fluid inside the body. Resting with the subtle internal movements – radically following what the body deeply affirms. Late modern societies with their regime of dynamic stabilization and increase of the pace of production, innovation and growth to sustain itself, enforces a colonization of our body/minds, making them rigid and passive, shaping a culture of seeing/pursuing no alternative.

„[…] late modernity has largely forfeited its cultural capacity to even conceive of alternative visions of being; it has lost any image or idea of what a better society might look like, of a motivating, inspiring utopia.“ (Hartmut Rosa 2019, p.1300-1301)

Accessing visions of being through connecting with my own fluidity. The major fluids of the body are cellular, interstitial and transitional fluids, blood, lymph, synovial fluid, and cerebrospinal fluid. Befriending the fluids is inviting changeability, is entering the unknown (the respective somatic method is called Body-Mind-Centering). Somatic/sensory awareness forms resistance to the regime of acceleration and stiffness – nourishing the soil to develop the cultural capacity for change. Rigidity and standstill are foreign to the body/mind leading us to dark places of shut-down/burnout/depression in which the old, the violence, the inner poverty perpetuates. Plasticity and creativity are the body-mind’s nature.

Rosa, H. (2019). Resonance: A Sociology of the Relationship to the World. Kindle Edition. Polity Press.