“Where do we go from here?“

The Pillow Talk Reload, an interactive installation by theatre maker Sonja Kovačević, is displayed at the Grófin Culture House in Reykjavik from June 10th till June 24th 2021. The set-up is installed on the left side of the main entrance of the Reykjavik City Library, which is unlikely to be passed unnoticed, includes an emergency bed which was once a bed of an asylum seeker borrowed from the Red Cross, a red fabric banner asking, ´Where do we go from here? ; and a speaker broadcasting stories of asylum seekers and refugees, who are or were in search of a better and a safe life for themselves and their families and seeking a secure legal status in Iceland, based on their own voices. Listening to those stories by lying down on the emergency bed, which is for me inherently loaded with the feelings of fear, anxiety and panic, but still being more about trying to survive and less about death, seems to add a further attentive and touching layer to the experience of visitors. 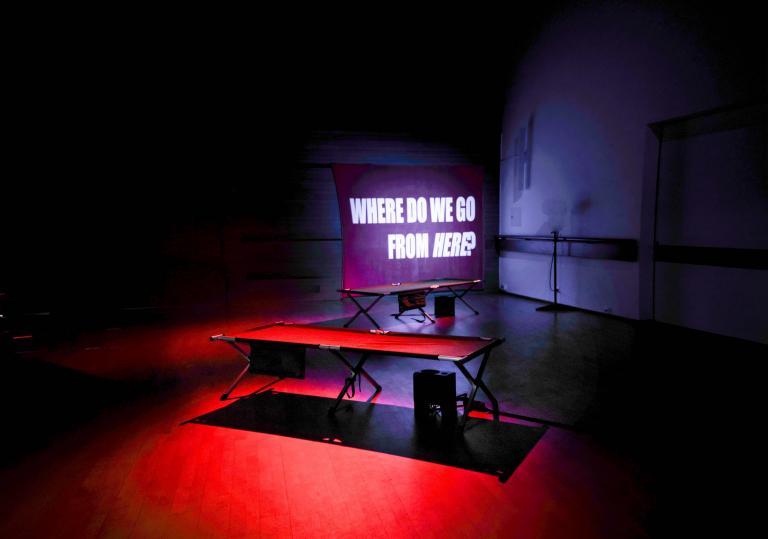 Deportation is a serious problem in Iceland, as in many other countries. Non-profit humanitarian aid organisations, community based platforms and activist groups such as  No Borders Iceland, Refugees in Iceland and Solaris run campaigns and organise  protests to stop deportations, especially  to Greece. According to the statistics of the international protection applications in 2021, only 60 applicants out of 287 have so far been granted protection in Iceland.  But gaining legal status does not actually ensure the feeling of being ´more´ settled and  secure, or having equal access to the same rights as any other foreigner who is legally resident in the country.

Activists, educators, art and culture workers can propose critical and pedagogical interventions into post-migrant Icelandic society at the Reykjavik City Library. And, notably, unlike any of the immigration authorities or  government bodies, the library does demonstrate not a heroism but rather an eager commitment  to intercultural inclusion.  Accompanying the Pillow Talk Reload exhibition, Sonja Kovačević led a workshop on intercultural sensitivity at the Reykjavik City Library which I also had an opportunity to participate in. During the workshop we, a group of women with different countries of origin, shared our experiences of living and working in different cultures, reflected on the way we respond to cultural differences, interpreted our privileges and disadvantages, addressed multiple and intersecting forms of prejudice and discrimination that we have faced or might face – and also started to review our tactics and alliances against hostility and  discrimination.

At the end of the day some of us knew that we would meet up again.