Entrance: the walls and floor create one long continuous surface of grey smooth concrete that invite me to step in. Background voices of a masked audience are echoed as I make my way to the exposed mechanism of a large music box. A melody is not played, but generated by the friction of the wooden cylinder with metal boards – sounds that remind me of a cautious walk on an old squeaky parquet. The slow and heavy rotation of the cylinder attracts my closer investigation of the tectonic-like boards scratching each other unhurried, and by doing so dictate my later-on unconscious slow wandering in the space.

The stairs: growing from the sidewall it looks as if wall and stairs are cast together. On their other side, they will finish sharply in a point reaching a one-centimetre gap that separates them from the left-side wall which runs consistently until reaching the second floor. There is little space in the narrow corridor through which I climb up. I mind the people who walk beside and across me while simultaneously paying attention to the black drum above our heads that plays from time to time. I wonder if it reacts to my actions, to other people’s motion, or if it is simply programmed randomly and regardless of anyone’s presence.

Second floor: this hosts a video piece that is presented on a very large screen in maximum resolution. A close look of a cautious and tender relationship between a musician, violin, one partiture, and two snails. The angle through which this relationship is captured centres the intuitive conversation between all players; and I think about deep listening and response-(i)-ability. The two snails are situated on the bow and progress along as they wish. It then becomes clear that the partiture suggests a base for this correspondence and I find it so compassionate that the musician and snails equally influence the playing by the movement they produce. There is so much tuning in to this exchange that I viscerally reflect on the sensible receptors of both the violinist and snails, on the quality of their communication, on their patience and delicacy. 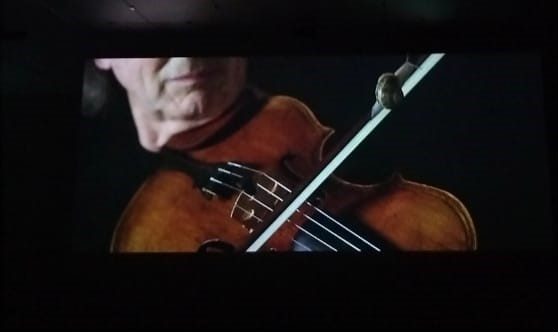 (Photo was captured by the writer)

Third floor: another huge space is stretched along several tens of square metres. Seemingly, nothing happens. I look at the people, I turn to small talk. I am suddenly urged to fix my sight that has gone blurry and by focusing on the person I am talking with I realise my sight is manipulated by the screening on the walls. My attention continues to flow towards the different behaviours of people in the hall. I am expanding my breath horizontally to both the deliberate and unintentional choreographies created through the changing proximities and relationalities; I could enjoy dancing here.

Fourth and last floor: a video work combined with lighting that conquers the space with a vertigo-like effect. It feels like a void, like a gravity-less world of destruction and chaos. The thunder and breaking sound, synchronised with the flashing lights and video, gesture the room with a stir and somehow polarise the combined experience of all the different spaces through which I pass again on my way out.

Kunsthaus Bregenz has launched Anri Sala’s exhibition on the 17th of July 2021. The exhibition will be open to the public until the 10th of October 2021.