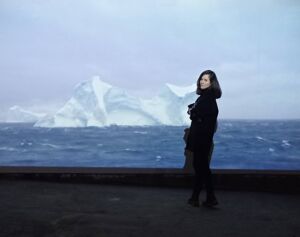 The Factory (Hjalteyri), exhibition view of “Inside the Frame” with works by Michaela Grill

About Elves, Stalin and Ecology

After spending two months in Iceland, I ventured out to travel west and north of Iceland, off the touristy Ring Road in search of art spaces away from the capital, Reykjavik. The journey is definitely worth it: The art initiatives are ambitious projects that were brought to life with a lot of passion and commitment, such as Outvert Art Space, which also offers a residency program for international artists, or The Factory in Hjalteyri, an artist run space, with an exhibition program on the anthropocene in a former herring factory.

Visiting the Akureyri Art Museum, which was under construction between two exhibitions, I was recommended to see the Icelandic Folk and Outsider Art Museum by the lady at the ticket counter, located about a 15 minutes’ drive outside of the northern capital.

A surprising discovery, because it provided lots of material in the search of what can be considered as socially engaged art. From activist textile banners by artist ElÍn Fanney Ólafsdóttir, to Unnar Örn’s collection of historical photographs of scientists sampling Icelandic landscapes, taken between 1890 until 1930 – a work that questions human intervention in nature. 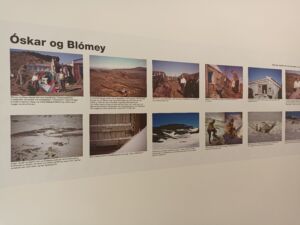 Right down to the artist couple Óskar Magnússon (1915 -1993) and Blómey Stefánsdóttir (1914 -1997), who lived in a house from 1973 to 1984 without any modern conveniences such as electricity or running water. It was a small, ramshackle house constructed out of wood and turf, and other local materials that they found in their immediate surroundings. Their specific lifestyle arose from both financial pressure and because they consciously rejected the system of capitalism. The two became known through their embroidery work, which Óskar regarded as the art of the working man: “There is no corner dark, no shake so small, that you cannot wave them. Painting is the art of aristocracy.” The initiative for this started with Blómey, who one day attended a weaving workshop. Óskar accompanied her and started weaving himself, too. They used their work as barter, for food or other necessities, but never asked for money. Content wise, the couple depicted Icelandic moments in history, their heroes, poets, but also personal childhood memories or landscapes where they lived. One extraordinary passion of Óskar’s was to produce portraits of Stalin, whom he was a great admirer of. In an interview with his granddaughter Ásdí, she reported that it was not unusual for her that her grandparents lived in these circumstances. She used to think that some people choose to live like this back in these times. Regarding her pleasant memories, she shared how she sat with her grandparents in the mountains, they boiled eggs together, picked heather and made tea. “We sat and talked about nature, elves and more and enjoyed the view. Those were great times.” Nevertheless, for Blómey in particular, her life as some kind of outlaw seemed to have more to do with the patriarchal relationship of their marriage than with her own free will. She suffered from the difficult living conditions and the controlling nature of her husband. Only after his death was she able to intensify her relationship with her daughter, who was born to another man. Her granddaughter even assumes that she was victim of domestic violence, even though Blómey would never admit it herself. “At that time, there was no discussion about violent relationships, no women’s shelter or support”, Ásdí explains. 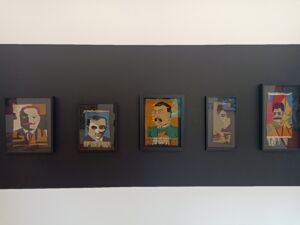 Óskar’s interest in Stalin may appear surprising at first, but looking back at Iceland’s history, there seemed to have been an active network between the leaders of communism with Nordic countries since 1918. The book Icelandic Communists 1918 -1998 describes how two Icelandic students, Brynólfur Bjarnason and Hendrik S. Ottósson heard a speech by Lenin at the second Comintern congress in Moscow in 1920, reporting on the importance of Iceland’s strategic location in the North Atlantic in the coming war. The two students received funds for propaganda in Iceland. It was the beginning of a lively exchange, in the next few years a small but determined core formed, which disseminated the ideas of communism. The circle consisted of young intellectuals who had studied in Denmark or Germany, and representatives were alternately sent to the Comintern Congress in the 1920s. This culminated in the founding of the Communist Party in 1930 with Brynólfur Bjarnason as chairman. During the Great Depression they organized violent demonstrations to discuss the plight of the working class. The party became particularly noticeable after the war, when Iceland joined the NATO in 1949, organizing violent demonstrations against it. During its existence between 1938 and 1968, the Socialist Unity Party enjoyed strong support, with nearly 20 percent of the vote, making it more active as a party than other socialist organizations in many other parts of Western Europe. Later on, the People’s Alliance began to operate as the party that defended worker rights and had close ties with the Soviet Union. However, it came to its somewhat miserable end in 1998, when the Icelandic representatives traveled to Cuba in November 1998 at the invitation of the Cuban Communist Party but were not received there by Fidel Castro as expected.

The curator of the exhibition, Harpa Björnsdóttir, explained Óskar’s interest in communist ideas: “Óskar was the oldest son of a farmer in northeast Iceland, sent from his family as a young boy to be fostered with another better off family, where he grew up and where he was treated well. He always had fond memories of his fosterparents and his fosterhome and many of his woven pictures depict the farm and the landscape surrounding it in Þistilfjörður. All his life Óskar worked in hard labour, in agriculture to start with and then as a harbour-worker later on. Before the second world war, and also when it was over, there was a strong movement in Iceland, as in Europe in general, where workers united and formed unions to fight for better wages, shorter working hours and better conditions. Óskar joined these movements and became a communist, and he believed strongly that Stalin was the prophet of the workers’ new era. Nothing could convince him otherwise, not even when Stalin eventually came through as the merciless dictator he was.”

Can one speak of ecological activism in the case of Blomey and Óskar? Their way of life, in defiance of capitalism, may suggest it. In ‘The rise and fall of environmentalism in the early Soviet Union’ (2014) Kunal Chattopadhyay describes how in the 1920s, the Soviet Union assumed a leading role worldwide in terms of environmental protection and ecological science. Later, however, through Stalin’s industrialization and the transformation into a bureaucratic state, these ideas were turned into their opposite.

Stepping into the room dedicated to the artist couple reminded me of my visit to the studio of Georgy Tryakin-Bukharov (born in 1943), who lives in a suburb of Almaty in Kazakhstan. He is one of the artists who, after the collapse of the Soviet Union, literally turned their shards into artistic material. Entering his garden, the visitor is surrounded by large pieces of scrap metal, which he assembles into monumental kinetic sculptures. In the 1990s, chaos reigned in the post-perestroika period, high inflation and political instability characterized the lives of ordinary people who, out of necessity, sold their belongings at improvised markets. The streets became some sort of museum in public space, with fragments of the failed Soviet utopia. Georgy’s works contain both comedy and tragedy at the same time. The sculpture entitled Mustang, for example, plays with the Russian meaning of the word garbage. Did he choose this title to show that all that is left of the once great utopia is rubbish? Or to criticize the flooding of the local market with Western brands? The artist comments that his works are created highly intuitively, yet technically they are very sophisticated, he spends a lot of time finding the right components, and in terms of content he leaves it to the viewer to create their own story. 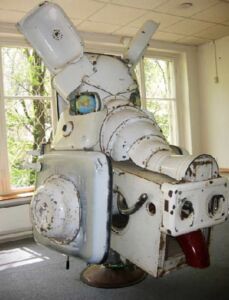 One of Georgy’s favorite themes is the fairy tale of the Three Little Pigs. He created a giant pig head, entitled Nif-Nif & Nuf-Nuf which is more than two and a half meters tall. He used materials derived from plumbing: an enamel bathtub, the bottoms of shower cabins, sinks and even a toilet bowl. The fairy tale tells the story of three pigs constructing their houses from different materials, the two lazy ones built their house from straw and wood, the third one built the house from stone. When the bad wolf came by, he was able to destroy the two rickety houses, however, the little pigs found refuge in the solid stone house and were saved. Even when the wolf tries to get in through the chimney, he burned himself and finally fled.

When pondering about these three artists, who have in common that they created works of art out of their precarious living conditions, everything else in their lives could not be more different. Still the question arises: who is the big bad wolf for whom? One experienced the socialist state up close and had to live with the consequences of the collapse, the other knew socialism only from the media and heroized the leader who actually brought about a lot of suffering. And for the female artist in this story, the big bad wolf was probably within her own four walls.

Email conversation with the curator Harpa Björnsdóttir (9th of June, 2022).