I spent several weeks in September at documenta fifteen in Kassel as part of my PhD research and in what follows I would like to share some reflections sparked by one particular piece called Mafolofolo: Place of Recovery exhibited in Parkhotel Hessenland, a workshop given by artist Michelle Sáenz Burrola in an international summer school at the documenta, organized by my colleague Meike Lettau at Zeppelin University and cultural policy researcher Özlem Canyürek to which I and fellow FEINART researcher Sophie Mak-Schram contributed as workshop leaders, and a lecture by artist and curator Nomusa Makhubu at the FEINART summer school later that month.

Mafolofolo: Place of Recovery is an audio installation made by the art group Made You Look (Ato Moiloa, Joao Orecchia, Joseph Mothupi, Modise Sekgothe, Nozuko Mapoma, Robyn Cook and Vallery Groenwald) and is based on seven years of research in the northern part of South Africa. What originally captivated me, was not the political context of the work, but rather the serenity I experienced as I took a seat in an old and darkened dance hall in a hotel in Kassel that had known brighter days, and the music — which had such a strong presence in the work.

The floor was lined with the cartographic; place names and lines that stood for rivers, but the elevation lines rose three dimensionally from the floor, in beautiful wooden structures where guests could have a seat. I took mine, just as the door closed and the singing of birds rose in the sound system. For the next twenty minutes I sat with my eyes closed and listened to fractions of stories and narratives, interwoven with the sounds of nature and music that escalated towards the end of the piece. I knew that the work was bound to this landscape. A brief text that I had read before entering spoke of how people’s strong relationships to this landscape were shaped by grief and contemplation, loss and return. The songs were heartening and defiant, and the stories and narratives told of the meaning of this land, and its ties to those speaking, “tracing a history of violence, racism, extraction, and ongoing dispossession that has very real contemporary urgencies” but was also conceived as “an opportunity for different imaginaries of relation with the land.” (Made You Look 2022) 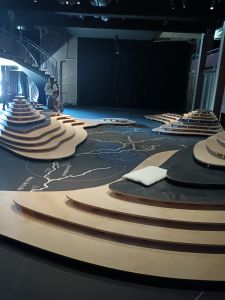 Digression About Oranges and Understanding Fully

I want to emphasize how much I appreciated the piece, without fully understanding the political context of the work. My knowledge of South African history is general, and my knowledge of the specific area at stake in the work was nonexistent. I say this, because I’ve had several conversations about the high level of contextualization needed to appreciate works at documenta. This is obviously not a new discussion, but I often do wonder how important (if possible) it is to fully understand. For me, Mafolofolo made an impression that lasted well after its suspension — a deeply affective impression. This impression was tied to place names such as Mafolofolo, Boomplats, Sekboom, Moholoxo-Pela, Khutwaneng and Crocodile, none of which I recognized. And although I have not been to South Africa, there was something familiar in the cartographic installation. Familiar, because maps are generally marked by place names and elevation lines, and other lines that mark rivers and yet other lines that mark borders.

This visual regime was also at stake in a brief workshop given by artist Michelle Sáenz Burrola. Michelle asked everyone to hold, and carefully observe, an orange and to draw on the bark the lines and trajectories that had brought each workshop participant to Kassel. When dozens of oranges had been passed around several times, taking on the significance of tiny globes, Michelle asked us to remove the bark in one piece and put on the ground so we could observe the maps thus made. They were colorful and smelled of orange and to understand these maps fully it was not enough to scrutinize the bark — the maps’ legend was dispersed across the consciousness of the group which made these oranges impossible to ever understand fully. 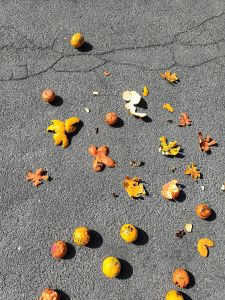 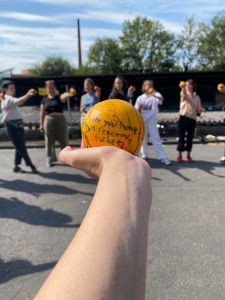 If we now return to the shaded installation, I rose to my feet from one of the elevation lines in the map and noticed a staircase leading up to a balcony overlooking the installation. I took the stairs and suddenly a new dimension of the work was revealed. What had operated three-dimensionally on the first floor, was gradually transitioning to two dimensions — as I observed the map from above. In this new position above the installation, I could zoom out and appreciate the work anew. And the meaning of the work would keep expanding. 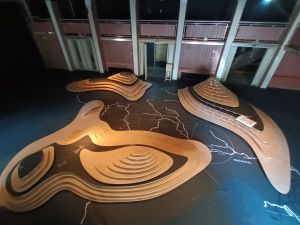 When I came back to the hotel foyer, there was yet another staircase to ascend, this one leading to a second floor where large tropical plants, wooden panels and red carpets, and an imposing gilded world map made by Carl Döbel, endowed the space with the aura of European expansionism and colonialism. The map shows land in gold and ocean in black and has adorned the walls of the Parkhotel Hessenland since the hotel’s opening in 1953. A small stand quoted the words of a journalist writing about the map upon the opening of the hotel that it was symbolic for the “world under one roof”. The spatial, temporal, architectural, visual, and textual language of the second floor further contextualized the installation on the floor below. Indeed, this rich site-specific integration was not an isolated incident in the curation of the documenta but rather a hallmark of ruangrupa’s strategy of working extensively with Kassel’s topography, which more fundamentally included collaborating with local communities and organizations. In the case of Mafolofolo, this site-specific curation introduces a certain irony — because the journalist’s words could just as well denote the legacy of the colonial and imperial world fairs of the late 19th century which certainly mark an important part of the genealogy of contemporary biennales such as documenta (cf. Marchart 2022). Importantly, documenta fifteen did not come across as wanting to gather the world under one roof, but much rather to counter the illusion that this is possible. 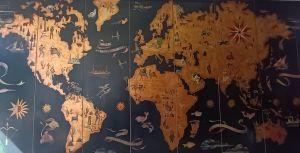 Yet other dimensions — Documenta as an invitation

Weeks after having experienced Mafolofolo in Kassel, I listened to Nomusa Makhubu, artist and curator talk about contemporary art in South Africa and the meaning of land in this context. A further layer of understanding was suddenly introduced to my experience, because South African apartheid was fundamentally implemented in 1913 with laws that confiscated the lands of black South Africans and pushed thousands of families out of their homes. In her talk, Makhubu contextualized the meanings of these events and spoke about how the ties to the land lived on in how people would introduce themselves. They would not only give their own name, the names of their father and mother, but also grandmothers and grandfathers and yet other ancestors — while also indicating their topographic trajectories, when and from where they were coming. And it was as if another staircase had presented itself above the installation, introducing yet another dimension to Mafolofolo — testifying to the way in which every artwork is an invitation — and indeed, the way in which ruangrupa intended documenta fifteen to be an invitation.

…when we were invited to make a proposal for the fifteenth edition of documenta, instead of integrating ourselves into the long-established documenta system, we decided to stay on our path. We invited documenta back, asking it to be part of our journey.

Made You Look. 2022. Mafolofolo: Place of Recovery. Exhibition Text installed at Parkhotel Hessenland at documenta fifteen.

All images are by the author