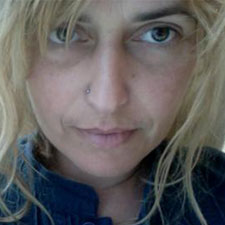 Dr Angela Dimitrakaki is a writer and Senior Lecturer in Contemporary Art History and Theory at the University of Edinburgh, which she joined in September 2007. She is Programme Director of the MSc in Modern and Contemporary Art: History, Curating and Criticism and teaches undergraduate courses on art and its contexts since the 1960s, including on aesthetics, politics and globalisation, feminism and sexual politics. Since her appointment at Edinburgh she has been supervising an average of five doctoral students per year. She works closely with her doctoral students, often collaborating in projects, to enhance art history’s social relevance.

Angela’s academic research focuses on feminist and Marxist methodologies in art history; art and curating in relation to labour, production and reproduction; globalisation and biopolitics; feminist politics and histories; art and culture in the diverse social contexts of post-1989 Europe; lens-based media, the video essay and post-documentary aesthetics; contemporary democracy and fascism. She currently works on two single authored books forthcoming in 2017: Feminism, Art, Capitalism, on the potential and contradictions of feminist politics in art practice and theory today; and The Economic Subjects of Contemporary Art, on artists and curators’ increased emphasis on economic relations since 1989 in an effort to contribute to a trans-disciplinary understanding of art’s complex links with socio-economic processes. She is guest editor, with S. Farris, G. LeBaron and S. Ferguson, of a special issue on Social Reproduction for the interdisciplinary journal Historical Materialism: Research in Critical Marxist Theory forthcoming in 2016. Angela has published widely in academic journals such as Third Text, Oxford Art Journal, Τέχνη και Κριτική [Art and Criticism], n.paradoxa and South, and has contributed to many edited collections.