tranzit is a unique network of civic associations working independently in the field of contemporary art in Austria, the Czech Republic, Hungary, Slovakia and Romania and across the borders of a wider Europe. Its main goal is to support and articulate emancipatory practices, establish connections between culture and society by moving across geographies, generations, and political realms. Each tranzit works under its own conditions in a variety of local cultural and social contexts, using different formats and methods to contextualize, generate or host theoretical, artistic and activist debates around today’s urgencies.

tranzit.ro has the particularity of being in its turn a network. Founded in 2012 in Iasi, TRANZIT.RO Association is active in three permanent spaces in Romania (in the cities of Bucharest, Cluj, Iasi), with an additional annual project taking place in Sibiu and numerous national and international collaborations.

tranzit.ro is based on solidarity and sharing of resources and it maintains its balance through keeping the autonomy of each centre and opening up for collaborations with different organizations. Its main purpose is maintaining a decentralized institution: which is in each place a hub for ideas on positive social change; which provides a safe space for experiment and exchange; which is dedicated to an integrated and open understanding of contemporary art as a gateway to a whole spectrum of knowledge; and which is raising awareness on the responsibilities and rights of today’s citizens. 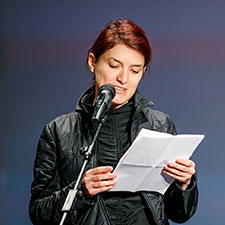 Raluca Voinea is curator and art critic, based in Bucharest. Since 2012 she is co-director of tranzit.ro Association. From 2012 to 2019 she managed tranzit.ro space in Bucharest, which included an art gallery, a communitarian permaculture garden and an Orangery (a space for hosting fragile plants and ideas), all developed organically and in response to both the local context and to more international frameworks. The institution will relocate to another space in 2020. Since 2008 she is co-editor of IDEA arts + society magazine and since 2012 the coordinator of the (Expozitii) collection published by IDEA Publishing House.  In 2013 Raluca Voinea was the curator of the Romanian Pavilion at the 55th Venice Biennale with the project An Immaterial Retrospective of the Venice Biennale by artists Alexandra Pirici and Manuel Pelmuş.