„Knowledge is like the carrot, few know by looking at the green top that the best part, the orange part, is there. Like the carrot, if you don’t work for it, it will wither away and rot. And finally, like the carrot, there are a great many donkeys that are associated with it.“[1]

My conversation with the St. Petersburg-based artist Olga Jitlina, who issued collectively the non-regular newspaper Nasreddin in Russia[2], inspired me to think about some issues with regards to my PhD research. The newspaper is published in cooperation with labor migrants coming to Russia. For this reason, the language in which the publication appears varies, based on the mother tongue of the migrants. In fact, the title Nasreddin in Russia deserves a closer look: It refers to the Sufi Molla Nasreddin from the Middle Ages, a folk character and wise man, who mastered any difficulties in his life with humor and playfulness. „He is a trickster, a holy fool“ explains Olga „Its about a paradox in which stupidity becomes wisdom or vice versa.“ A satirical Azeri periodical which was found in a wide geographical area from Morocco to India at the beginning of the 20th century is named after him. The artist collective Slavs and Tatars made the effort to reissue this paper into a publication.[3]

Why is this interesting? In view of socially engaged art, which often draws on imported discourses from the West, the question remains: Are there alternative ways of talking about local peculiarities without using the theory of Western discourses? A paradox happens in this context, when characters from local stories are quickly labeled as a phenomenon of “self-orientalization” and offer desired material to the capitalist market that welcomes everything exotic and different.[4] However, this poses a risk: that is, artists or art theorists will continue to refer to recognized discourses in order to be heard and accepted. In fact, it is fascinating that the periodical paper Molla Nasreddin appeared at a time (1906-1930) when the Dada movement emerged. Both consciously refused any logic. In her book Sufism, Annemarie Schimmel tried to describe the impossibility of a coherent definition of this movement due to the many paradoxical facets.[5] Sufi stories are characterized by the fact that they often do not make sense. Again, the conscious strategy is to negate the intellect, to mislead the mind. A natural reaction to absurd scenarios that fall out of the ordinary is to laugh.

Olga Jitlina reports that the element of humor actively helped her to find access to people. People felt freer when they told jokes, this gave them the necessary protection and at the same time the necessary distance to share what they had experienced with others. Number three of the newspaper Nasreddin in Russia is dedicated to the trend among Central Asian migrant workers in Russia to reenact music videos of their idols, which spread extremely quickly on YouTube – a phenomenon also popular among Latin American workers. The internet offers a form of alternative community building that is possible across geographical borders and is more likely to be reflected in similar personal experiences and creative expression. The Russian composer Sergei Nevsky observes these people seemingly trying to say: „We refuse to be invisible. We exist. And we are no worse than the media gods (..).“ he acknowledges „Indeed, sometimes they are better.“[6]  Often migrants cannot pursue their true interests or a career in the profession they learned for economic reasons, , and in the process of adaption their real abilities stay unnoticed. „There are many gifted people among the migrants, great specialists and cultured people; but it is hard to see who they are, to recognize them. They are very discreet, very cautious, when they know you are watching them. After all, they adjust quickly to life here.“[7] reports Kyrgyz-born and Moscow-based author Ilhamjan Abdukaharov. Possibly, these music videos are an expression of the balancing act of people who have to cope with harsh conditions in everyday life and still try to pursue their true interests. And in fact, the performers are bubbling over with joie de vivre and enthusiasm. When you watch the videos, you quickly forget about the background with the construction site and the improvised instruments and you are captured by the infectious rhythm. In Sufi philosophy, music and dance have a special meaning as they prepare the soul to dive into a deeper level of reality.[8] It is another form of returning home that is detached from the environment and everyday circumstances, and allows a person to immerse themselves into the joyful state of ecstasy. Perhaps that is the invisible message these videos are meant to remind us of? 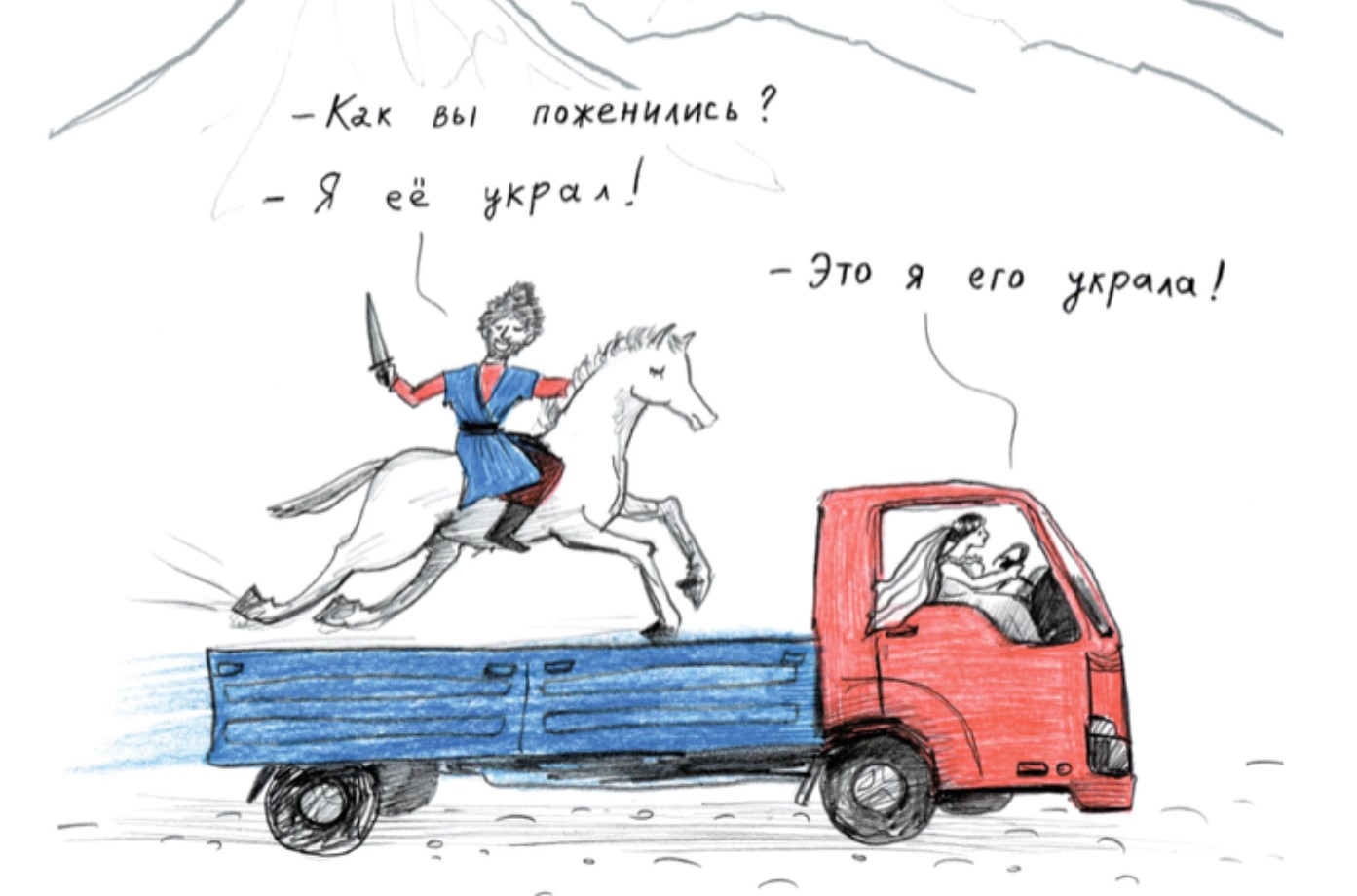 Caption: Illustration by Anna Tereshkina for Nasreddin in Russia, Issue 4, St. Petersburg 2017. (engl. translation: „How did you get married?“, „I stole her!“, „Actually, I stole him!“)

[1]‚Nasrudin the Wise: The Value of History‘. In: Dan Keding: Elder Tales: Stories of Wisdom and Courage from Around the world (Westport: Libraries Unlimited, 2007), 151.