Tracing the history of artist-run spaces and initiatives in Iceland…

Iceland has a long tradition of artist-run spaces dating back to the late 60s. Artist-run spaces contribute to the local and global arts ecologies by providing space for diverse and experimental exhibitions, varied discursive events and workshops, and by featuring both emerging and professional local and international artists.

I have been examining the significance of the independent art spaces in the cultural ecology of Iceland, along with the existing arts infrastructures and the resources available to them. For my research, the importance of the self-organised artist-run model lies in its alternative modes of organisation, non-commercial approach to producing arts and culture, and its contribution to contemporary art, culture and society. This model also refers to pedagogical & curatorial models critically responding to the dominance of institutional and commercial agendas over artistic and curatorial production. And it is fascinating to see how artist-led practices not only build collective creative capacity but also a critical community outside of discipline-specific applications.

Discovering the heritage of artist-run spaces and initiatives in Iceland begins by the artist collective SÚM. SÚM was formed in 1965 by a group of artists, Haukur Dór Sturluson, Hreinn Friðfinnsson, Jón Gunnar Árnason and Sigurjón Jóhannsson, as a critical response to the monopoly of the FÍM (Félag íslenskra myndlistarmanna /Association of Icelandic Artists), which was established in 1928, and in response to the modernist abstraction of the postwar period (Runólfsson, 2016). The name of the group is an abbreviation of the Association of Young Artists –  Samband ungra myndlistarmanna, seems to highlight and celebrate the diverse practices of young artists ongoing at that time in Iceland.

The artist-run gallery SÚM was opened later in 1969/Reykjavik and played a crucial role in introducing new and experimental approaches, art forms and techniques to the local arts and cultural scene. Art historian Heiða Árnadóttir´s overview on the Gallery SÚM (1969-1978) reveals that the idea to establish an independent contemporary art museum to ensure the conservation, documentation and dissemination of new and experimental arts was realized with the establishment of the Nýló (short for new art in Icelandic) – Living Art Museum – in 1978 /Reykjavik.

Nýló, The Living Art Museum, is one of the oldest artist-run organisations in Europe, running as an NGO in Iceland with 380 members. Nýló was founded by a group of artists, including a majority of the SÚM members, with the aim of building an artist-made collection and an archive to preserve the work of their peers, which otherwise would likely be lost or destroyed. Later, in 1981, The Living Art Museum Gallery was founded and it became a venue for exhibiting art along with collecting and archiving.  Today, the space hosts exhibitions of artists at all career levels working with a variety of mediums and techniques.  For instance, the current exhibition Never the End  (08-31.05.21) is an MA degree show featuring the works of graduating art students of Iceland University of Arts. Previously, internationally acclaimed multidisciplinary artist Katie Paterson´s exhibition The Earth Has Many Keys (13.03-25.04.21) was on view, exploring interrelations between human beings and their natural world alongside evolution of life through the vast expanse of geological deep time.

Today the Living Art Museum is located in the Marshall House which was built in 1948 as a herring factory in the old harbour area of Reykjavik and has been functioning rather like an arts centre since the 2017 spring. The artist-run space Kling & Bang also co-exists in the same building, and the collective has an important role in influencing and inspiring the local and wider arts and cultural scene since 2003, by maintaining a platform for artistic and curatorial production, and discussion of a variety of artistic and cultural projects.

The Living Art Museum and the Kling & Bang are the oldest artist-run spaces which are still active in the field. Based on the information available at the publication titled Archive of Artist-Run Initiatives of the Living Art Museum, the majority of the artist-run initiatives unfortunately generally operate for about two or five years at most despite the lack of infrastructure and funding. And the lifespan is usually limited to the lease period. For instance, throughout their existence, the Living Art Museum and Kling & Bang also had to change locations several times because of the unstable rental market and the changes in the financial conditions over time. And sometimes joining the forces seems to be one of the gracious ways of tackling the crisis, like the organisation of the auction & fundraising event (2014) by the Living Art Museum when the members and artists donated their works to fund a new house for the museum.

As said at the beginning there is a long and rich tradition of artist-run spaces here in Iceland, with an incredible degree of peer-connectivity as the anchor. For me, subsequently emerges the curiosity for what we can learn from artist-run initiatives and artist-led practices beyond and beneath what they have been showing us. 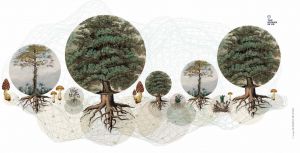 The network the artist-run spaces have formed seems to have been transforming, evolving, not always growing but sometimes shrinking as well. The conditions of their co-existence and the support network(s) they have formed reminds me of the wood-wide web & mycorrhizal networks, symbiotic associations between tree roots and fungi in a forest ecosystem. Why not look at mycorrhizal associations as a basis to explore, rethink and speculate on peer-inter-connectivity and practices of co-existence among artist-run spaces? There is always a lot to learn about and from the underground.