The recent violent incidents that have taken place in my home country, Israel, and in Palestine have aroused the attention of many cultural institutions and universities internationally, and have brought about the publication of responses and political declarations. I would like to offer my contribution as well and articulate my views from the particular angle of a person who was born and matured in, and has been shaped by, this conflicted territory. How should I write in a way that does not antagonise the reader given my privileges and the fact that, while I write this text, the violence, destruction and misery continue? Perhaps I can start with identifying myself through stating that I feel it is my moral, human, civic and professional commitment to express my views on such a platform as FEINART, which addresses questions of society, justice and democracy. While being a part of a funded and communicated academic network, I recognise the power, but more fundamentally, the responsibility that comes by virtue of my position. I recognize that my position is a combination of some degree of privilege given that I was born into a middle-class Israeli family, but also the result of hard work and persistence in the pursuit of my artistic and academic occupations. I dwell on the critical description of the person I am and how I perceive my situation, in order to clear away, as much as possible, the prejudices and baggage that may appear in the light of my identification as an Israeli.

A combination of two main events have led to the escalation and the burst of armed attacks between Israel and Hamas: firstly, the Israeli Supreme Court’s ruling regarding the evacuation of Palestinian families from the Sheikh Jarrah neighbourhood in Jerusalem; and, secondly, the nationalistic flag parade of the extremist right movement in Israel – “Lehavah” – occurring annually on ‘Jerusalem day’, organised in order to assert Israel’s ownership over the city of Jerusalem. Significantly, these two events took place during Ramadan which is holy for the Muslim community and is generally considered to be a sensitive period in mixed-population cities, particularly in Jerusalem. Prior to the armed attacks, and as the situation started to escalate, the Israeli media raised questions as to why the police do not intervene sufficiently enough to prevent the provocations of extreme right-wing activists, given that their actions could lead to a worsening of the already distorted status quo existing between Israelis and Palestinian. Forecasts and warnings became real on the 10th of May when the armed attacks between Israel and Hamas started and showed clearly the beginning of a battle that joins former ones in 2009, 2012, and 2014. The novelty of the situation, however, is the additional outbreak of dozens of violent riots between Israeli Jews and Arabs in mixed-population cities. Such violent events may be defined as a retreat from, if not the collapse of, the sensitive Arab-Jewish social fabric that was has been built on the premise of trust and co-existence.

The thirty-three years of my life in Israel have taught me the meaning of a true desire for dialogue; what hatred is; and what is a lack of vision and neglect. The violent crisis that is now taking place is the product of, among other factors, a racist and manipulative regime that for the past twelve years has removed from the Israeli collective consciousness the possibility of imagining peace and reconciliation between the two peoples. It does so by enacting a policy that keeps resistance to the occupation relatively “quiet”, but in practice actually strengthens the terrorist organization in Gaza (Hamas) at the expense of cultivating a dialogue with the Palestinian Authority in the West Bank. Simultaneously, far-right populations in Israel are freely encouraged, and left-wing thinkers are portrayed as traitors.

There is an intricacy to Israeli politics that in my view is not taken far enough into the discourse and as such misses a very important point regarding the conflict at present. This intricacy pertains to the political rupture in Israel and the persistent struggle of Israel’s current Prime Minister, Benjamin Netanyahu, to stay in power. The timing of this war proves this – it broke out during Netanyahu’s series of trials for criminal offences and during the thirty-day period where the mandate to form a government is given by the president to the opposition, after Netanyahu had failed to gather a sufficient coalition. If the idea that the escalation of the armed struggle was deliberate and intended to serve Netanyahu’s political motives to stay in power, is merely speculative, then I am happy to reference the events that ended Trump’s rule in the United States, and the links between power and megalomania.[1] However, not all Israelis ascribe this war to Netanyahu’s political motives. In fact, a two-faced potential reading of the situation can be seen as the basis for the rift in Israeli society: On one side are rightist communities located, largely, in peripheral cities who absorb most of the missile-fallings in times of war and routine. They are angry about their situation and therefore back and even admire Netanyahu’s hostile policies against Palestinians in and outside of Israel. On the other side are leftist communities who seek to free themselves from Netanyahu’s rule and view him as a corrupt criminal who will do anything to continue to control the State of Israel, including going to war when he so desires.

The population of Israel is ruptured and there is no single hegemony or consensus regarding various socio-political issues, particularly with regard to the Israeli-Palestinian conflict. Against right-wing communities are persistent peace and justice-seeking communities who are not represented by the current government, but are significant in size, resonance and power (e.g. the four election rounds in the last two years). These communities believe that it is the right of the Jewish people to live in the state of Israel, as much as it is the right of the Palestinian people, in their pursuit of self-determination, to form their own state on the same land. This belief reflects the understanding that both peoples see this land as their physical and spiritual home; and therefore, that compromises should be found on both sides. The hope that sustains this belief is that these communities are exhausted from being victims of their respective extremist regimes. 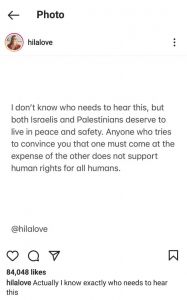 Within Israeli territories are Arab-Jewish populations who work toward, and act within, civil society. Either by force of being neighbours or actively organising and running grassroots initiatives, they practice co-existence, partnership and solidarity. Unfortunately, such peace-building initiatives are currently endangered by the tense climate and violence within Israel. Examples of such are the burning of the offices of the Arab-Jewish theatre in Acre, the numerous quarrels between Israeli and Arab gangs, and the prosecution of news reporters and public figures who publicly condemned the war. Despite all these confrontations and under the danger of missile-fallings, Arab and Jewish citizens have still attended central traffic junctions in Israel and protested for ceasefire and peace. Their message was significant particularly for confused and dismayed Israeli citizens, Arab and Jews, who within a day saw their neighbourhoods becoming a war zone and feared that violence will start on a neighbour level. 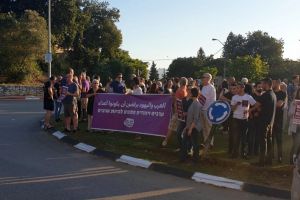 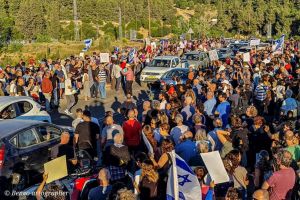 Arab-Jewish joint protests throughout Israel during the armed struggle, supported by ‘Standing together’ movement. In the sign: “Arab and Jews refuse to be enemies!”

My motivation for writing this text is to firstly explain the stratified and complex political reality, inextricable to the conflict. Having no interest in defending Israel’s policy and actions during this war, I feel it is personally important for me to discuss what I think is missing in the rather binary use of language – ‘them or us’, ‘condemnation or reinforcement’, ‘for or against’, ‘Palestine or Israel’ – that I see in various political statements throughout the world. With an awareness of the nature of public statements and of the imperative to tactically use language for creating stark impact, I believe this approach does little in contributing to Israel-Palestine’s dwindling chance for peace-making and reconciliation. In fact, claims for favouring one people and not accounting for the destiny of the other, meet the reality of fearful individuals, who vote for ‘powerful’ politicians who promise security alongside the promotion of the most nationalistic, hateful, hostile and de-humanising policies. What if we were to call for a cessation of the dreadful violence against civilians pursued by extremist regimes (Israel’s current government and Hamas) as well as pushing for international interference and mediation? Would not this be equally powerful and promote a better solution, and enable what ultimately has to be found – shared compromises and trust? My worry concerns the intensifying polarisation that is further eroding the belief in and opting for peaceful solutions for both people.

I would like to conclude by expressing my empathy, pain and solidarity with the Palestinian and Israeli families who lost their loved ones and possessions during the war. Within this context, it must be voiced and recognised that the toll at each side is incommensurable: the death toll in Gaza raised to 248 people, while in Israel it is 11[2]. While refusing to get into a cynical quantitative discourse about the conflict, I was trying to convey within this short text what I think should be pleaded and fought for – the right to a peaceful and decent life on this land – for both peoples.