I was lying on the ground in a room. I don´t remember the images well enough to describe the scene. As far as I could recall, some images were like 3D neuron cells, and some were glowing mycorrhizal networks. The mix of the colours were changing at a high speed. The dominant colours were blue, purple, magenta and orange. The images were turning around freely. Sometimes it was like seeing an aurora dancing across the night sky in a variety of colours. Each direction felt like the same direction, I was disoriented but not lost.  I sensed only the familiar.  After a while, it began to feel like being in a phantasmagoria show. Now the room was full of mist, the figures were looming out of the darkness. It was a total illusion. I feared what I believed.  But it was just a dream.

The flashbacks brought me to the media archaeology of immersive mixed reality spaces. The idea of “letting images float”, which formerly emerged in magic lantern and phantasmagoria, also forms the immersive multimedia experience today. When we look at how spaces of illusion have been constructed throughout the long media history, the core idea is to integrate the human body and intensify illusion by minimizing the distance with the image (Grau, 2003). The biological principle seems to remain the same. Today, however, images the observer is subjected to are mostly interactive, digital and evolutionary, greatly different from the ones used in early panoramas, still and analogue.

Usage of the optical devices and toys for entertainment purposes, in addition to their use in inventions in optics, physics, and mechanics, dates back to the 17th century. But the popularity of the magic lantern was backdated to the late 18th century, when the Galanty Showman was travelling with the magic lantern to make shows.[1] The images of spiritual creatures, mythological characters or historic figures surprised people as if they magically appeared. There were also phantasmagoria shows, mostly known as horror shows, where the projector and the showman remained hidden from the spectator behind the translucent screen to boost the sense of wonder and fear. 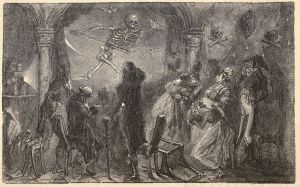 The popularity of the phantasmagoria shows was later overshadowed by the panorama shows, where the observer was surrounded by frameless, all-embracing images.  According to art historian and media theorist Oliver Grau (2003), panorama represents the highest developed form of illusionism created with traditional techniques, letting the viewer travel through time and space in a space of illusion.  At that time, some people would not even otherwise come into direct contact with famous landscapes depicted on panorama paintings (Della Dora, 2007).

Today the immersive multimedia art experience can be more interactive and multi-sensory with the use of new media technologies. Some contemporary media applications seem to throw up the interesting possibility of sensing by proxy though. But the observer entirely immersed with the multimedia exposure may not be subsumed only by rich visual and sonic materials suffused with digital technology. There can be machine-made moving images of any sort, computational matrix of cellular composition of human beings, or billions of data visuals from Big Data, in growing, glowing and hypnotic patterns. It might even seem progressive on the surface, but this time, behind the translucent screen there is computational capitalism.