I felt so excited to exit the airport, the UK.. ah! I missed you. Your funny logic of the roadway and unforeseeable weather, the historical architecture that makes one feel as if stepping into history, the amazing parks where James Blake’s songs sound so much better. My affair with the UK mainly took place in London, where I did my masters in 2018-2019. It was my studies of arts administration and cultural policy at Goldsmiths that brought me to this island I have never been before. Interestingly, I now find myself in the UK two years later, closing a circle and re-visiting more critically all that I have learned at Goldsmiths about cultural policy.

It was after spending around seven years of first-hand experience in the precarious cycle that my academic inquiry at Goldsmiths on the working conditions of dance artists had started. I had dived passionately into this research as I was awfully curious to learn more perspectives on the matter and figure whether others had like experiences and held similar opinions to mine. I was confident that this issue is of no dispute; namely, that working conditions in the UK contemporary dance sector are by most exploitative and precarious. Largely, it proved true. However, an interview I had with the executive producer of one of the most prominent contemporary dance companies in the UK that hire its dancers on a basis of short-term contracts revealed the managerial view on this matter. To him, the diversity of the ensemble was key for quality storytelling, but more importantly, he stressed that art produced under pressing conditions is more interesting and provoking. It was what I called then – the extracted juice from life practices of effort. He emphasised the tenacious quality of movement that to him deliver this ‘wow’ effect to dance. I was well aware of what he meant, as many ascribe this quality to Israeli contemporary dance, produced, indeed, under precarious conditions and influenced by the conflictual context of this territory. Does this have truth to it or is it just a cynical (ab)use of committed job-seeking artists? Perhaps it is both. 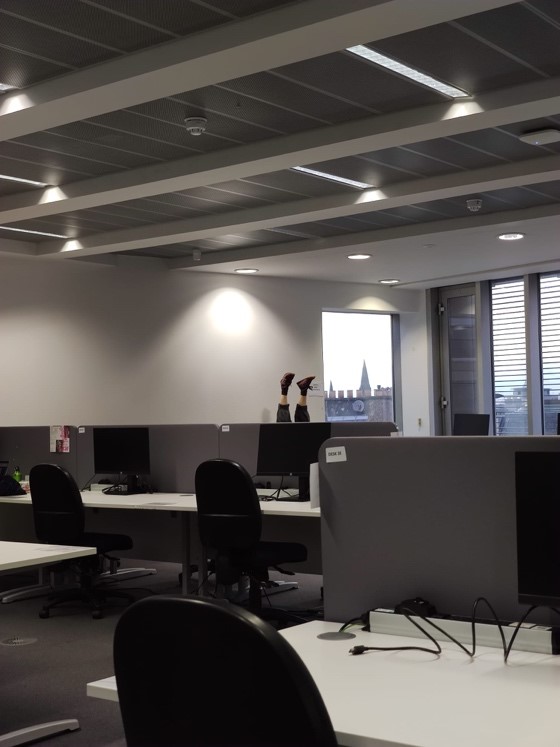 This is a comic intermission. Photo taken by the loveliest Fabiola Fiocco (see blog no. 11) who caught me in a moment of refreshment.

This double contingency reminds me of Bishop’s criticism of the New Labour (1997-2010) cultural policy in the UK. Already in 2006, Claire Bishop, a prolific art historian and critic, discusses the adoption of the rhetoric and practices of Participatory Art by the New Labour  cultural policy, criticising its rendering of participation into measurable objectives and instruments of social impact. (Bishop, 2006, p. 180) I see those two examples meeting at the juncture of systems and extraction, the uneasy and controversial design of institutional frameworks for value making.

The case of the UK is a significant one. Not only because the British model of cultural policy has inspired and been adopted in parts by other European countries, but also because it can be read and discussed in multiple ways. The British policy, at least in the last twelve years has been consistently preoccupied with several key themes: Diversity, inclusion, participation, and engagement. The term Engagement is a good example for explaining the issue around the British model’s hybridity. Engagement has been comprehensively used in cultural policy discourses in Britain (and largely in Europe) regarding the twofold benefit of creating art that is engaging. One is the moral achievement involved in attaining cultural democracy, that is, actively engaging everyone to ‘decide what counts as culture, where it happens, who makes it, and who experience it’ (Arts Council England, 2018, p. 2). The second is the financial potency of cultivating different engagement strategies for maintaining existing audiences and attracting new ones – the core activity of audience development agencies – most prominent in the UK – that insert cultural democracy thinking into marketing trajectories. The hybridity of social concern coupled with financial motivation strongly defines the British cultural policy system. That is, on the one hand it is considered in Western liberal democracies to be a hallmark for a policy prototype that successfully and innovatively mediates social value from a neoliberal perspective; and on the other hand, represents a progressive assault on art institutions to democratise culture, but, as a result impairing art’s inherent and unmeasurable value.

If you expected some answers on this month’s blog, then I am very sorry for the disappointment 🙂

But maybe you have thought about it? I would love to hear them.